Now that we know the enormous influence that the apparent wind has on the kite’s traction, we further complicate things and see what happens in the different gaits.

In the examples and reasonings made so far, we have always considered a constant ride across the wind, but if we go with the board in favor (downwind) or against the wind (upwind) we modify the effect of the apparent wind.

Premise: to simplify the reasoning, in the examples that follow we will keep the speed of the board constant in the various directions, even if in reality this almost never happens.

Certainly you will have noticed, especially in situations of medium or low wind, that if during a normal traverse it rests to start ride downwind, the kite seems to lose power, the cables lose tension and the kite becomes unresponsive, sometimes it stops to plane and the kite seems to sink towards the power zone without any increase in power, vice versa if we edge to return to the beam or upwind, instantly the kite gains power, advances rapidly towards the table glide direction, returns to be very reactive and we must immediately counter the traction by biting the water with the table: what happens?

It is always the apparent wind that changes intensity and changes the position and width of the window. The other obvious effect is the rotation of the window (see previous paragraph) and this explains why as soon as it is left, the kite seems to ‘sink’ in power zone: now we know however that, in effect, it does nothing but chase the new window edge position.

Furthermore, the decrease in wind that actually acts on the kite causes the width of the window to be reduced, further backing the window edge.

With the formulas illustrated above, we calculate how much traction we lose by passing from 14 to 10 knots: by developing all the calculations we get a reduction in traction of about 40%.

Notice how only 3 knots of difference, in poor wind conditions, change the situation, almost halving the power.

In practice, the situation described in Figure 6b is only transitory, in the sense that if we can go at 10 knots with little wind and sideways and then lean back, the reduction in traction can cause us to lose glide, slow down and therefore further reduce traction until it sinks. Vice versa, with strong wind, exactly the opposite can happen, that is, it accelerates to the slack instead of slowing down and you find yourself in full glide, without being able to edging with the upwind’s edge of the table and therefore without being able to adequately oppose itself to the traction . It is a situation with no way out, because the more it accelerates, the more traction increases due to the apparent wind: the board, gliding over the surface of the water, decreases friction, leading to a further increase in speed and so on in crescendo , as long as you slip into a wave or fall at high speed.

In this case, despite having a decrease in the apparent wind and therefore of the traction immediately after starting the slack, the reduction of the friction of the board, which was very resistant thanks to the pressure of the feet on the windward edge, amply balances the lower traction and on the contrary it allows the table to increase the speed by increasing the apparent wind again and, if the wind is strong enough, this grows in a short time to values higher than those that were had across, starting the vicious circle described above until the inevitable fall.

At this point we can easily guess that the apparent wind is upwind and indeed it is. Let’s compare the three situations of downwind, crosswind and upwind: Now let’s try to do some calculations to see what happens, with the same natural wind going from a downwind to a upwind direction: if you try to develop the formulas shown above, you will find that the apparent wind speed goes from 10 to 17.32 knots , with a remarkable increase of 73%, but the traction literally explodes, with an increase of 200%, that is triple!

It may be interesting to know that the variation of traction at different speeds does not change with the reference speed of the wind: in other words, if you try to develop the calculations starting from 20 knots of natural wind, instead of 10, you will find that passing from the downwind to a upwind direction the difference in traction triples in any case.

What varies are the absolute magnitudes, in the sense that if I triple 10 kg of traction at 10 knots, I can manage it safely, but if I triple a traction that is already down to 25 kg, I probably won’t be able to contrast the kite and I will be dragged downwind.

At this point one might think that it is enough to tighten more and more to have an increase in traction and therefore to be able to make incredible bumps.

In fact, every kiter with a minimum of experience knows that in reality this does not happen, or rather, he knows that traction actually increases but at a certain point, continuing to tighten, it does not flare up any more, even though it has to contrast with great force the power of the kite. Comparing figures 8 and 9, we note that, despite having a rotation of the window, from the slack to the upwind, of 30 ° in a favorable direction, that is, following the course of the table, the window edge ‘recedes’ with respect to the route with an angle of same amplitude, passing from 45 ° of the slack to the 75 ° of the upwind.

This phenomenon has a negative consequence which is represented in figure 10, where the components of the kite traction are highlighted by vectors:

As you can see, part of the traction does nothing but drag us downwind, only a part is used to move forward.

Basically it happens that, the more the bowline is tightened and the window edge moves back with respect to the direction of the board, the more the useful component of traction is reduced.

The difference is noteworthy, going from about 71% of traction useful down to a poor 26% of upwind, almost two thirds less: in substance, upwind we can exploit only a quarter of the power of the kite, the other three quarters are literally wasted.

Let us then try to calculate how much energy available to upwind is transformed into useful traction to maintain the gait.

In practice, the energy that is actually converted into forward speed roughly is the same both upwind and downwind, but that which is wasted varies considerably.

Furthermore, to dissipate the wasted energy, great pressure must be applied to the upwind edge of the board, generating great friction which tends to slow us down. 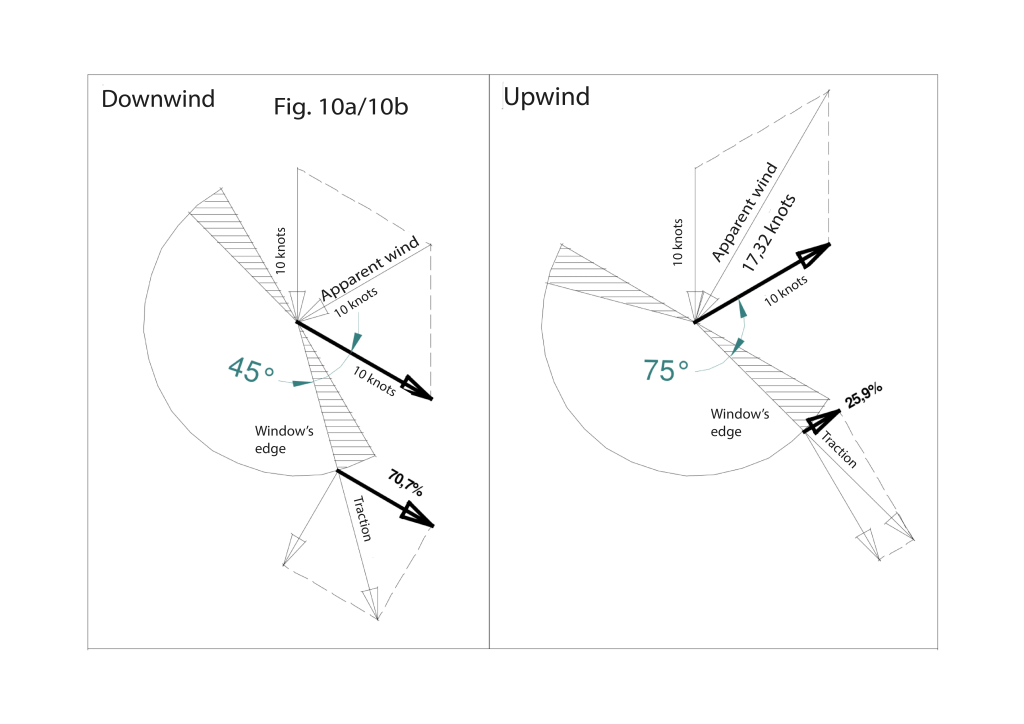 The waste manifests itself in the form of a very high water trail generated by the action of the table, in our muscular effort to oppose the kite that tends to drag us downwind, in the great tension of the cables.

This also explains why, despite the fact that the kite generates very little traction (the cables become loose, the turns are slow, etc.) it is possible to glide anyway: there is much less traction but almost all is used because the resistance of the table, practically flat on the water surface, is reduced to a minimum. In practice you have to decide which is the best compromise: upwind, based on the characteristics of our table, our kite and the intensity of the wind, it is often more profitable to reduce the speed to make the window edge less backward and therefore take some upwind degrees, rather than seeking maximum speed to amplify the effect of the apparent wind, because then one realizes that the window edge recedes to the point that, even reaching high speeds, it is possible to stay only a few degrees narrower than the transverse , or, while managing to obtain the same angle of upwind, the muscular effort is considerably (and unnecessarily) superior.

On the other hand, you have to evaluate when to stop resting, to prevent the traction from dropping to the point of losing the glide: in this case it is often enough to luff a little and regenerate just enough apparent wind to make the traction rise again. a sufficient level.

With strong wind, the possibility of drastically reducing the apparent wind can be very useful.

Suppose we have lost, for any reason, the set-up on the board and reduced the pressure on the upwind edge: the board starts to accelerate and we can no longer counter the traction and the vicious circle of speed increase and traction.

At this point, rather than trying to recover the upwind, it is much better to rest decisively, going aft: in doing so, we subtract our speed from the natural wind, canceling the apparent wind and reducing the kite’s excessive traction in an instant. .

Once we have slowed down and feel that the kite has returned to manageability, we can luff and resume normal gait.

Also for the upwind, we must also consider the influence of the angle of incidence in 4-wire kites.

As we have seen in the paragraph on the width of the flight window, varying the incidence through the depower ‘I moved the edge of the window, which moves back when I can increase the kite and advances when I leave it: this behavior is exactly the opposite of that which we would like in case of weak wind.

When it is difficult to bounce, common sense leads us to strengthen the kite, but often it is more advantageous to do the opposite, that is to de-power the kite and try to tighten more through an advancement of the edge of the window rather than with the greater power.

If traction is not enough, then you can try to make it fly up and down in the window, start to glide, perhaps crosswise or slack, and once the glide is acquired, de-power the kite, advance the window edge and exploit the greater wind apparent to compensate for the lower angle of incidence and thus maintain sufficient traction for the upwind.

From direct experience I have discovered how this technique pays more often than one would think, especially with kites with a high AR that have a very large window and a large shot on the edge of a window: in short, often upwind makes a kite a little more powerful (power intended as a low angle of incidence) that flies with a very advanced window edge than a very powerful one that flies backward.