Now that we know the enormous influence that the apparent wind has on the kite’s traction, we further complicate things and see what happens in the different gaits.

In the examples and reasonings made so far, we have always considered a constant ride across the wind, but if we go with the board in favor (downwind) or against the wind (upwind) we modify the effect of the apparent wind.

Premise: to simplify the reasoning, in the examples that follow we will keep the speed of the board constant in the various directions, even if in reality this almost never happens. END_OF_DOCUMENT_TOKEN_TO_BE_REPLACED 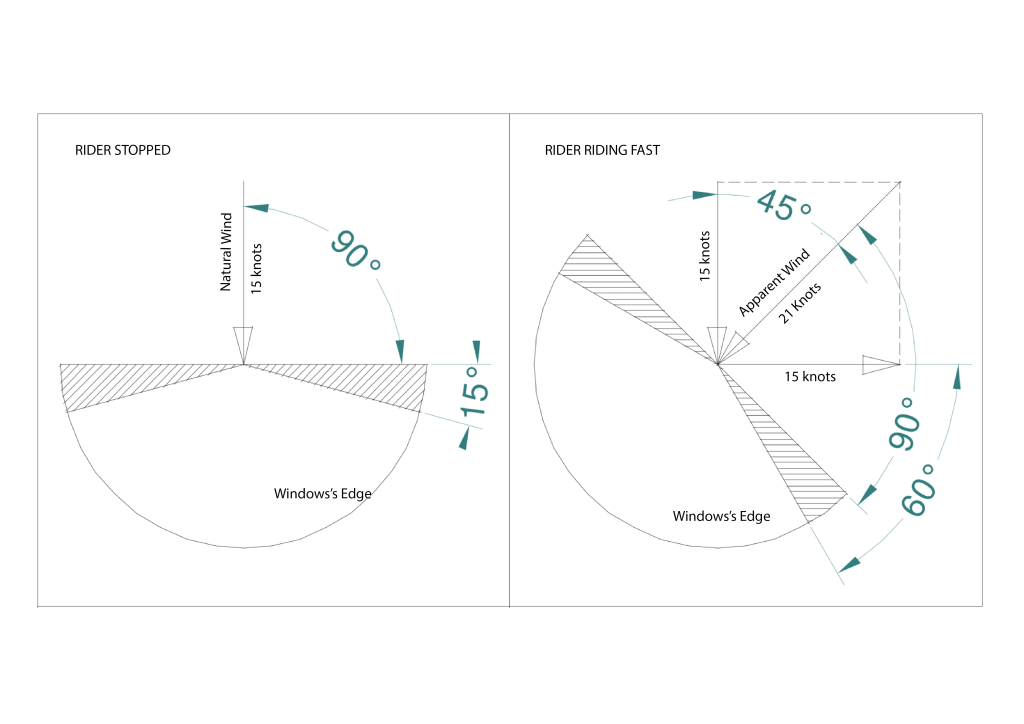 END_OF_DOCUMENT_TOKEN_TO_BE_REPLACED

Read this after reading and understanding the apparent wind blog post.

Let’s try to analyze the combined effect of the apparent wind and the exponential relation between traction and speed. Suppose we are still in the water with the kite standing on the edge of the window, which pulls for 20 kg: we start from the water, we start gliding and we park the kite at the edge of the window to tack at the side at a speed of 15 knots at this point, due to the simple effect of the apparent wind, which means that the wind with which the kite is flying is not more than 15 knots but 21 abundant (see fig. 1), the kite, although still standing at the edge of the window, develops a traction twice that generated before starting to tack.

If then at the speed of the table we also add the speed that we give to the kite when we make it fly up and down in the window quickly, we can arrive at situations in which the traction reaches values ​​that are 10 or 15 times higher than those generated when we are stopped in the water with the kite at the edge of the window.

END_OF_DOCUMENT_TOKEN_TO_BE_REPLACED

With the previous figure we have shown how the apparent wind can multiply the natural wind intensity by 3 or 4.
From the beginning, the experience has taught us that obviously the kite is faster and more pulls, but the feeling is that the power in the power zone is well above three times as much as the one generated at the edge of the window and is actually just like that, because the speed-power relation is not linear but exponential, so the pull of a kite is a function of the square of the wind speed.

This simple rule affects all aspects of the practice of kitesurfing and is what allows us to start, glide with little wind, to make spectacular jumps and is always the one that, unfortunately, creates many of the danger situations that your instructor has illustrated during the course.
Let’s take an example: enter the water with your kite which, in 10 knots of wind, generates a traction of, suppose, 20 kg: after a few minutes the wind strengthens up to 20 knots.

END_OF_DOCUMENT_TOKEN_TO_BE_REPLACED

The knowledge of the concept of apparent wind and its effects in the practice of kitesurfing is essential to maximize the potential of the kite.

We begin to introduce the general concept that concerns any sailing boat and then we will see the peculiar aspects for kitesurfing.

The wind that acts on the sails of any sailing boat when it is still, is only the natural wind, but once the boat has reached cruising speed, a part of the wind generated by the wind is added to the natural wind. boat speed itself. END_OF_DOCUMENT_TOKEN_TO_BE_REPLACED

During the course you learned the basics about the wind window, but there are some considerations to make to better understand some kite behavior.
The following figure is the one that is generally shown by the instructors:

It is a plan view, and therefore in 2 dimensions, and it is the one we will use for almost all the following examples, given that for our calculations at the moment this representation is sufficient.
The first thing to say is that a kite in flight, naturally and inevitably tends to reach the window edge, the kite never stops in a position that is not the window edge.

END_OF_DOCUMENT_TOKEN_TO_BE_REPLACED

This is the first part of an interesting guide (Geppy Piloni – Teoria e pratica del kitesurf), modified a bit and traslated in english for you! Hope you find it usefull!

Immediately after the kitesurfing course, in that phase during which you can ride but still can not return to the starting point, I began to wonder why some kite behaviors and in general what were the rules that govern the kitesurf practice.

I progressed rather quickly, but I could not fully understand all the theory and physical phenomena that determined the techniques of conducting the board and the kite: I was learning without knowing why. At that time, there were very few very good practitioners and even fewer experts: every time I meet another kiter, I was bombarding him with questions but almost always the answers were unsatisfactory or even conflicting or inaccurate, so I started to think , to make sketches and calculations.

When I thought I had found a satisfactory explanation for the questions, I thought that maybe my notes could be useful to someone else and I decided to publish my conclusions on the Internet.

In order to fully understand the concepts expressed, the reader should be a kitesurfer who knows the basic terminology and flight techniques, who has done a proper course at a good school and maybe some session independently.